"Remnants of the Damned" FINALIST in the Readers' Favorite Awards 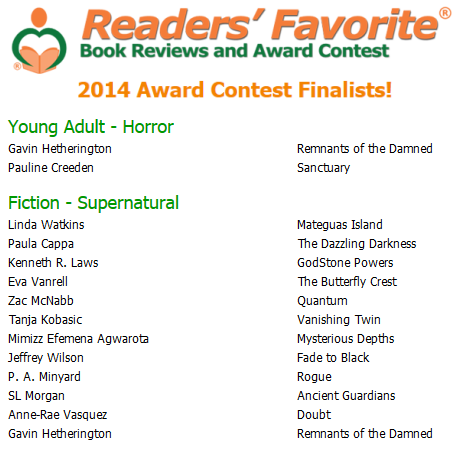 Yesterday, the finalists for the Readers' Favorite Awards were revealed. Remnants of the Damned (Abyssal Sanctuary #1) was among the list of OFFICIAL FINALISTS in the two categories it was nominated for, including 'Young Adult - Horror' and 'Fiction - Supernatural'. I am so happy and so proud of this achievement.

When I noticed there was only me and one other author up for the Young Adult Horror award, I thought it was just because it was us two that were nominated for the award. Turns out that's not true and it's actually a pretty amazing thing. This is what the announcement said that explains categories with only a couple of entries.

We are proud to announce the finalists in our 2014 Readers' Favorite
annual International Award Contest! This was no easy task as this year
saw a record number of contestants, with categories having from several
dozen to several hundred contestants depending on popularity.
The order of the finalists displayed in each category is random
and does not imply any form of ranking.


It is important to remember that books are judged exactly the
same in a large category as they are in a smaller one, which means an
award level will not be granted simply due to lack of competition. As a
result you will notice that some categories have only a couple of
finalists, this is because despite the number of entries in that
category, only those books received a score equating to a possible
award level.


Our judges picked an average of 6 finalists from each category.
Categories with a larger number of finalists is the result of books
being a finalist in multiple categories.
However, when judging is complete on September 1st a book will
only be a winner or finalist in ONE category. Authors currently listed
in multiple categories will only be listed in the category where they
won their highest award and will be removed from all the other
categories they entered. This will reduce the number of competitors in
these currently larger categories.

See that? "Only those books received a score equating to a possible award level"! That means Remnants of the Damned received a score equating to a possible award level! It also means it will only place in one of the categories it was nominated for, but even so I am still so amazed and excited by this achievement. I really hope it wins an award, it would be such an achievement, but good luck to all of the other participants!
Winners will be announced on September 1st. If my book wins, then I could potentially go to Miami to attend an award ceremony to pick up the award. How cool would that be? I'll keep you guys updated on the progress of the awards.