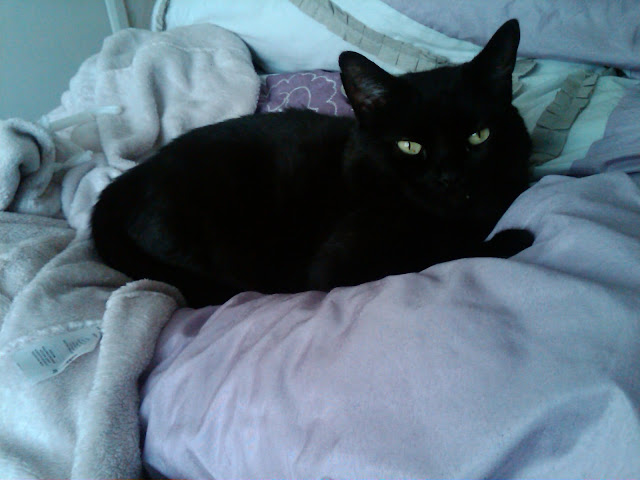 Just like my first short story - 'The Christmas Fawn' - my new one has just been published in the Newcastle Centre for Literary Arts Review! This one is about the day I had to get my cat, Tom, put down.

It sounds pretty morbid, I know, but I loved my cat Tom so very much that I was devastated when me and my family had to make the decision to get him put down on April 16th 2015. He had lymphoma and it got very bad, so it was the only thing we could do so he wouldn't suffer any more. This very short story was a way for me to remember my little boy. I wrote it as part of an assignment for my second year at Newcastle University for my Prose module.

Like my short story from earlier this year that I wrote last year - 'The Christmas Fawn' - I submitted this one for consideration for publication in the NCLA Review and they accepted! It is now featured in the November 2015 edition of their newsletter, which you can read here. The section where I am mentioned will take you to this excerpt of the short story. They can only feature a small part so it's really just a little taster of the story. This very short story only comes to a word count of 1,774 words.

'Goodnight, Tom' is about an unnamed boy who takes his beloved pet, Tom, to the vet in order to be euthanised. The boy goes through a wave of emotions as he is forced to deal with the death of a pet. While this was what happened to me in April, some things have been changed, such as I went with my mum and sister but for the purpose of the story, I only made it about this boy and the connection he had with his cat.

If you are interested in reading it, I have included it below. Let me know what you think! I always appreciate feedback.

GOLDEN leaves cried from the sky as a gentle breeze swept them up in a calm tornado. They danced around the young boy, walking stiffly from the only car in the parking lot. It was colder than usual. He looked down, his eyes heavy. In his hand was a pet carrier. Within the pet carrier was Tom, his beautiful black cat.

“Oh, God.” The words erupted from the depths of his throat. He turned his eyes away, not baring to look. His knees expired as he exhaled noisily. Now crouching, he scrunched his eyes shut, fruitlessly containing the water that escaped down his face.

They were still together. They still had time together.

He opened his eyes slowly. Tom was looking at him through the bars. The cat was alarmed, almost frightened. He didn’t understand what was going on. His eyes never left the boy. The boy’s eyes never left the cat. The moment carried on, that fleeting, blissful moment where both were connected. But the boy knew what was coming.

It took a force of courage to erect the boy. His grip on the handle of the pet carrier tightened. He never wanted to let go, even as he took his first steps toward the entrance of the veterinary. The world was at a standstill. No cars passed on the highway. Nobody crossed the street towards him. It was just him and Tom.

He looked at the man. His mouth moved. He was smiling. Why was he smiling? What possible reason did he have to be happy? People don’t come to veterinary hospitals with animals that are healthy.

“Can I help you?” The man’s words finally managed to break through the boy’s barrier.

“I have an appointment.” The words croaked from his mouth reluctantly. The more he spoke, the more the lump in his throat threatened to break him. He gave his name and waited for the man to allow him to leave his gaze.

He took a seat in the waiting area. On his lap he rested the pet carrier, allowing Tom to look right at him. The boy smiled at the cat. He wanted to speak to him, tell him it was all okay, but the bough behind his eyes was breaking each time the clock ticked.

It was summer 2004. The boy was with his siblings when their aunt drove past a pet shop. They’d always wanted a cat. How incredible would it be to get one and surprise their mother with it when she finished work that night? His aunt already had two cats so she knew what she was doing. The boy didn’t. As excited as he was, a deep-rooted fear also sank in. What if he couldn’t look after it?

It will be cold tonight.

One of the doors in the waiting room opened. The boy looked up at the woman who opened it. She was looking at him. Oh not yet, he thought. Please, not yet.

She called him over. He nodded and delicately lifted the pet carrier from his lap. He rose as he did so slowly. Dread washed over him but he knew he couldn’t turn back.

The room he entered was far smaller than he imagined. It didn’t feel right. This couldn’t be the room. It had to be somewhere else. The woman closed the door behind him and beckoned the boy to place the pet carrier on the table in the middle of the room.

“So has the steroid treatment helped?” The woman asked.

The boy shook his head. “I haven’t noticed any difference in him since taking them.” The boy took a breath. “He started choking last night.”

The woman took the top of the pet carrier off, allowing Tom to remain in his comfortable position on top of the blanket. There was a time a visit to the vets with Tom resulted in him clawing the vet’s hands to pieces. He just lay there, barely able to move.

“The lymphoma is very far advanced, the swelling of his throat is making it difficult for him to breathe and eat.”

“Last we spoke, we discussed what should happen next if the treatments didn’t work. Have you made a decision for… what’s his name again?”

The boy coughed, hoping to speak clearer. “Tom. And yes, I’ve had to think about it and I think it’s the best option.” His voice cracked. “He’s never choked before, but last night it scared me so much.”

The veterinarian looked at him sympathetically. “Euthanasia is the best way for him if he’s in so much pain, and he is in pain. You’re making the right decision, it’s the best thing for him.”

“I just need you to sign this form for consent, and I am sorry to ask but I have to make sure you are able to pay the fee,” the woman said. She handed him a piece of paper with a blur of words all over it, as well as a leaflet. “You can look at this for options of what to do with the body.”

“We’ve had a lot of people go for cremation and there are some lovely caskets in the leaflet. I’ll let you sign this form and look at the leaflet while I sedate Tom.”

She carefully wrapped her hands around Tom and picked him up. He opened his mouth as if to cry. The boy kept his gaze on the cat until the vet left the room with him.

The boy placed his hand over his mouth. The violent bursts pulsed through his body. He squeezed his eyes shut. Ugly noises sounded from the gaps in his hands, muffled but audible enough for anyone in a next room to hear.

After a minute of crying, the boy finally turned his attention to the form. He tried to read it but couldn’t make sense of the words. Years of studying English Literature felt wasted on the boy. He signed the form anyway, placing his trust in the person who was inevitably going to change his life forever.

With his curiosity for the leaflet aroused, he flicked through the small number of pages. The caskets were tiny and advertised as if they were cute and perfect. None of them looked good enough for Tom.

“Have you decided on what you want to do?” The woman’s voice appeared out of nowhere. “Sorry about that, it was really hard to find a vein, but we got there in the end. This little fella was good as gold.” She lay Tom on the blanket.

“Erm, yes. Cremation is what I want. I haven’t picked a casket yet.”

“Don’t worry about that, you have plenty of time after. There’s a cheaper option for cremation, where your pet will be put in with other animals to be burned but you wouldn’t be guaranteed that it will be Tom’s ashes you get back.”

The boy scrunched his face. “I don’t mind paying the extra to definitely have Tom’s ashes back. And I will get them back, won’t I?”

“Yes, you will definitely get Tom’s ashes back.”

The boy nodded. He tried to avoid Tom’s gaze since they returned to the room. Guilt choked him, but he couldn’t stay ignorant. He looked down. Tom looked at the wall in front of him. He looked so tired.

The roof of the boy’s mouth began to falter. The woman was ready to euthanize Tom. The boy scrunched his face, using every fibre of his being to keep from breaking down at this crucial moment.

“Are you ready?” The woman asked him.

No, he wanted to say. One more day. But he could see that it had to be done. He gave her a nod.

The woman injected something in the tube connected to Tom.

The boy almost had a fit. The woman left the room, saying something as she exited, something like “I’ll give you the room”, but the boy wasn’t sure.

Tom lay restless. His eyes moved fractionally as the boy lowered himself into Tom’s eye line. The boy put his hand over Tom’s paw. He rubbed his arm up and down, trying anything to make his last moments comfortable.

The boy could barely see for the tears blinding him. Hundreds of deafening thoughts made it impossible for him to think clearly. For the rest of their time together, they kept their eyes locked, staring at each other.

What have I done?
Please forgive me. Oh Tom, I’m so sorry. I’m so sorry for the times I ignored you because I was too busy to spend time with you. I’m so sorry I didn’t protect you from this, that I let this happen. I love you so much and I hope you can forgive me.
You’ve been there for half of my life. You were there while I grew up. You were there whenever the kids would bully me at school and I’d come home and you’d just be there. Always.
Now you won’t see me graduate from University. You won’t see me married or meet my children. You won’t be there for the rest of my life. I love you so much and I promise I will never forget you.

As the boy cried loudly, Tom’s pupils grew big. All movement ceased. The boy stopped crying for a few seconds to acknowledge that ultimate moment.

He leaned in and kissed him on the head. After closing the cat’s eyelids, the boy whispered, “Goodnight, Tom.”
Labels: Gavin Hetherington Goodnight Tom NCLA Review Newcastle University Newsletter