'Ashes of the Innocent' wins GOLD at the Global eBook Awards! + Updates 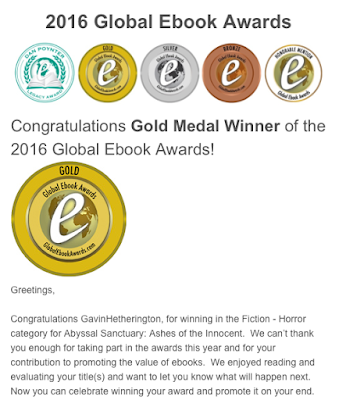 I am so excited to announce that my second book, Ashes of the Innocent, has won the GOLD AWARD for HORROR FICTION at the Global eBook Awards! I'm still in shock a little so it's going to take some time to process this information, but I am so thankful for this amazing accolade and I want to extend my deepest gratitude to the judges of the award.

In 2014, my first book - Remnants of the Damned - won the Silver Award in the same category, so I wasn't expecting to get any higher than Silver this time around, or any kind of placement in the awards. However, I am so proud that the sequel has managed to take home the Gold - go Team GH!

A huge congratulations to all the other winners at the 2016 awards! For a full list of winners, click this link.

I also thought I could include here that the first three books in the Abyssal Sanctuary series have now all peaked within the Top 40 Horror stories on Wattpad. Here are the peaks, as of August 14, 2016:

Collectively, the series has over 140k reads, over 4.8k votes and over 2.5k comments on Wattpad. I am amazed at how well the books have done since the first one was featured last month on the site, leading to the sequels to also receive a boost in rankings and readership. Thank you Wattpad for believing in my book and vision. 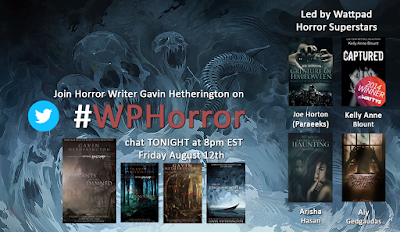 I was also recently invited to be the featured guest during a #WPHorror chat that is held every Friday at 8pm (EST) on Twitter by some very famous faces from Wattpad. These authors have multi-million read stories and truly define the Horror genre on the publishing platform, so I was extremely honoured to be asked to be interviewed during this event. The live session happened August 12th and I had so much fun talking all things horror and Abyssal Sanctuary during it.

I think that's it for now. There is more huge news I want to share with you guys but that deserves its own post, and I am so excited to post about it. Keep an eye on this blog, I'll be posting in the next few days about it. There are also some top secret news that I have to keep quiet about for now, but hopefully I will be able to share the great news as soon as I can.

Thanks for the continued support and patience! Love you guys. Have a great Sunday!
Labels: abyssal sanctuary ashes of the innocent global ebook award