I have never ever done NaNoWriMo. It's a terrifying concept to write 50,000 words in one single month, to commit to it and see it through. At the same time, it's the motivation I needed to write a story I've wanted to write for a long time. I have always wanted to write an LGBTQ+ novel and now I have the chance.

So when I was running through London's Gatwick Airport last month to try and catch my flight to Toronto for WattCon, I had an image of how I could start an LGBTQ+ book - have one of my main characters running to catch his flight, just like how I was. I was like, okay, that's a pretty decent opening. I managed to get on my flight (though my luggage did not), and while I was thinking about that opening scene, I started to think about what would happen next - he would meet a handsome stranger at the gate, they would have a connection, and then they would fall in love on the flight.

I've always wanted to write a Titanic-esque story where the viewer meets Jack and Rose as they're on the Titanic - a ship fated to sink. Everybody knows it's going to hit the iceberg and it will spell disaster for this budding romance, so even though it's a beautiful love story, you just know from the beginning it's going to have a tragic ending. I always wanted to write a story like that but for two gay characters. So, my readers are going to know that something tragic happens 9 hours and 17 minutes into the flight, just so they have that sense of dread building up until we get to that moment.

I didn't think to do this story for NaNoWriMo until a few days before the event started. A few of my writer friends on Wattpad have said they were going to do it so I thought I'd jump on the bandwagon. Now we are 8 days into the event and I have 13,863 words done so far with 7 completed chapters. I am also uploading those chapters daily on Wattpad, so feel free to check it out and let me know what you think!


Click on the chapters to be taken to that page (as of November 8):

This is the temporary cover art; I am currently waiting on a cover artist to get back to me about the new cover. I'm very excited! 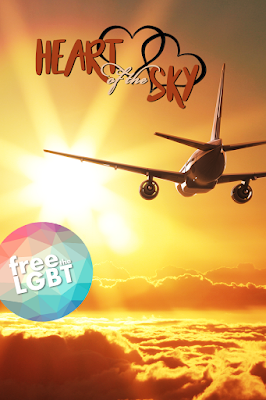 Be sure to follow my NaNoWriMo journey by adding me as a buddy on their official website - I am more than happy to support your journey too!