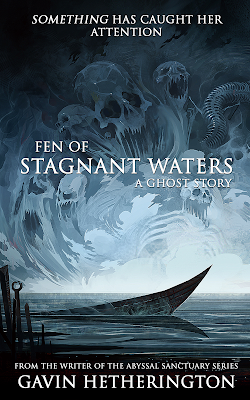 The time is almost here for the premiere of an exclusive excerpt to my upcoming ghost story - Fen of Stagnant Waters. This is a quick update, but I just wanted to reveal the cover artwork for the novella.

Do you like it? The story itself is still a work-in-progress but I've already written the first chapter and I'm going to write the next 11 chapters before October, so then I can premiere them all on Wattpad in the 31 days leading up to Halloween.

The excerpt I will be premiering on August 4th during Kelly Anne Blount's Wattpad Block Party - Summer Edition II, is from the sixth chapter of the story. While I haven't written anything but the first chapter leading up to the excerpt, it was a moment that I imagined and just had to write down. Kind of like how Stephanie Meyer began mid-way through Twilight so she could write a scene she imagined in her head. I hope the excerpt will go well with people reading the Block Party posts, and I am very excited for it.

I am looking towards maybe starting the story officially on Wattpad on October 3rd. I have been invited to attend the NYC Wattpad-Con by Kelly which will happen on October 1st, so by the time I fly back home from New York to England, it will probably be October 3rd, so that could be when the story premieres, but I'm not too sure of specifics yet. I'll know more when I get more details. Regardless of that, I definitely want the entire novella to run throughout October, and so I will spread out the 12 chapters leading up to Halloween, where I will post the final chapter of the ghost story.

This is a brief synopsis of the plot, though I will polish it up and hopefully make it sound better in the coming months:

"Why are you breathing so loudly?" He asked.


It's 1845. Rowena Holloway, an inexperienced writer from London, is looking for her big break to be published, but she is repeatedly told that she has no life experience to authentically write a piece of fiction. When she hears about some mysterious goings-on in a small village in the North of England, she journeys there in the hopes of finding the story she so desperately craves.

When she arrives in the small village of Grasmere, she is instantly compelled to the open landscapes and the cottages that make up the Lake District. Rowena takes up residence in Dove Cottage and soon submerges herself in the culture of the Northern people and begins to ask questions about disappearances and sightings that have terrified the children, and also left some of the villagers dead.

Rowena is about to get more than she bargained for when she unlocks the secrets to the ghostly world that has now opened up to her. She will have to learn all she can about the dead that now surround her, or she will end up as one of them. Someone is after her, and something has caught her attention.


You can add the book to your reading list on Wattpad so you can receive updates of the story, and I will post when each chapter will be posted. I really want this to be like a true Halloween-esque event. It's also currently #454 in the Paranormal charts, which is unexpected as I haven't even started it yet. Check it out: