Another year (almost) over. 2016 - it's been a crazy year in terms of what's happened in the real world (Brexit, the Presidential election, so many celebrity deaths, R.I.P. George Michael), but amongst all that chaos, as far as my writing journey goes, it's been an incredible, incredible year.

The exciting news I wrote about in my last post has been made official - I've been made into a Wattpad Star! The stars program on Wattpad recognises influential figures on the platform and hooks them up with incredible opportunities with brands and companies. I was asked to be part of this program by one of the leaders herself, Caitlin, at LonCon 2016. It was a very special moment and one that I didn't believe for quite some time, so now that it's all official, it feels great to be able to say it properly on this blog. For more information about the program, visit here.

Another exciting opportunity came my way this year that I had to keep pretty hush-hush until the official announcement a couple of weeks ago. Kelly Anne Blount approached me to be part of an incredible anthology of original stories written by some of Wattpad's finest writers, and so I wrote a brand new story named 'Fawn' for the anthology, aptly titled Snow. I took some of the themes of a short story I wrote a couple of years ago called 'The Christmas Fawn', adapting it into an 11,000+ word story exclusive to the anthology. It will be published March 1st 2017, so keep an eye out for more details.

Check out the cover of the anthology, it's simply gorgeous (created by Lucy Rhodes), and the list of writers who have collaborated on this are a truly talented bunch: 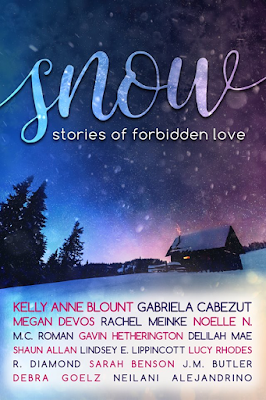 So pretty, I'm genuinely in love with the cover, and my name is on it, omigod! I'll do a proper press release closer to the time with details of stories, social media links, and everything, so keep an eye out for that.

I have also been notified that my third story in the Abyssal Sanctuary series, 'Rise of the Ripper', didn't win in the horror category it was nominated in for the Fiction Awards 2016, but the team did select my story to win the 'Should've Been You' award, for stories that were picked by the team especially that didn't win in their categories. I feel so honoured, thank you so much. The full rundown of results are here.

I began 2016 still recovery from my bimaxillary osteotomy that I had on December 22nd, 2015. Still, I premiered the first chapter of my third novel in the Abyssal Sanctuary series on Wattpad on January 4th 2016. Since then, I have managed to write and publish 21 chapters out of 36 (and hopefully I will have another chapter ready by New Year's Day). The current word count sits at 67,152 words with 15 chapters still to write. That's down from the first 21 chapters of Ashes of the Innocent (which had 76,333 words in its first 21 chapters), but up from Remnants of the Damned (which had 46,615 words in its first 21 chapters). A total of 90 chapters in the Abyssal Sanctuary series have been done, and I cannot wait to get to that 100th chapter. I plan on having Rise of the Ripper complete by around May (I also have dissertation and uni work to do by then so bare with me on that estimate), and the fourth book started summer 2017.

I managed to venture away from the Abyssal Sanctuary series by writing a full novella titled Fen of Stagnant Waters: A Ghost Story, that premiered October 3rd and ended October 31st for a Halloween event on Wattpad. The story became featured and currently sits at over 44,000 reads. A side-piece short story I wrote taking place years after the story, titled Jack-in-the-Box: A Halloween Story, was featured in the Sharing Nightmares anthology before it was later featured in Wattpad's very own Fright Bites anthology. I'm still currently writing the Little Mix musical fanfiction, titled Black Magic, for fun.

I was very honoured to win the Gold Award for Horror Fiction at the Global eBook Awards for Ashes of the Innocent a few months ago too - an honour that continued to elevate 2016 in my writing journey. This led to my appearance at WattCon in New York City where I spoke on a panel with some of the most successful people from Wattpad. It meant I got to travel to a place I have always wanted to visit, and it only added to the number of adventures abroad I had this year - New York, South Africa and Paris. Volunteering in South Africa was a true highlight with Reach Out Volunteers and something I would urge everyone to do.

The day my first novel, Remnants of the Damned, became a featured story on Wattpad was truly the day my life turned around in 2016. I definitely attribute the success I found in 2016 to the fact that Alessandra plucked me out of the crowd and gave me that opportunity. Eternally grateful to her. Very happy that all three books in the series have peaked in the top 30 (#8, #14 and #26 respectively), and hopefully there will be more to come in 2017.

I think that's everything covered. Hope you all had a fantastic Christmas and that 2017 will be the best year yet!
Labels: abyssal sanctuary Gavin Hetherington little mix musical remnants of the damned Rise of the Ripper Snow Anthology wattpad Wattpad Star